Today marks 137 years since the death of Aaron Sherritt at the hands of his best friend Joe Byrne. This event was the trigger for the Kelly Gang’s Glenrowan campaign and would ultimately result in tragedy for most everyone involved. 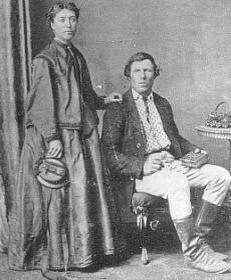 On the evening of June 26, 1880, German immigrant Anton Wick was walking home from a friend’s place along the road at the Devil’s Elbow. As he reached the crest of a hill he noticed before him two horsemen dressed in long topcoats and low-crowned hats. As it was dark he could not recognise them. As they approached him he wished them a good evening but they were unresponsive. Wick continued on his way only to hear the horsemen double back towards him. One of the riders came up next to Wick and asked him “Do you know me?” to which Wick replied in the negative. “I am Joe Byrne.” said the rider, sweeping aside his topcoat and brandishing a pistol in his belt. Presently the other rider, Dan Kelly, approached Wick and Joe gestured towards him stating “This is Mr. Kelly.” After Wick was handcuffed by Dan he was informed that he was to accompany the outlaws.

Aaron Sherritt resided in a small hut in Eldorado, just outside of Sebastopol, with his young wife Ellen (nicknamed Belle) who was pregnant. The hut was situated on an embankment just adjacent to the road with concealed holes built by miners leading from the property, under the road and out into the scrub on the other side, which Aaron would use to move unseen from the hut. On this night accompanying the couple was Sherritt’s mother-in-law, Mrs. Barry, and the four police constables (Armstrong, Duross, Alexander, and Dowling) that had been stationed with Aaron for his protection. Since 1878 Aaron had been providing information to the police and had become somewhat of a star-informant in the eyes of Superintendent Hare despite most of the information being bogus or misleading. Sherritt had been working very closely with Detective Michael Ward, whose idea it seems to have been to have a police party assigned to Aaron. Aaron’s younger brother Jack had also been working with police under the code-name “Jones” and he had earlier warned Aaron that the gang were beginning to suspect them of colluding with the police. Much of this was also driven by an incident involving Joe Byrne’s mother spotting Aaron resting with a police party on the Byrne property and the subsequent falling out. Aaron had been engaged to Joe’s sister Kate but the betrothal was broken off. In retaliation, the spurned Sherritt had stolen a horse belonging to his former fiancee and showed it off to Kate Kelly. Mrs. Byrne had lodged a complaint and Sherritt had found himself in hot water. Word spread as fast as wildfire through the bush telegraph to reach the gang and planted the seeds of doubt in Joe’s mind. This revelation combined with Joe’s addled mental state as the result of opium withdrawals would prove fatal for Aaron Sherritt. 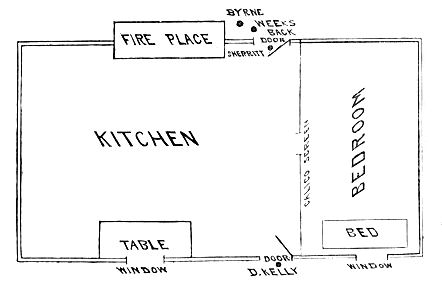 Relaxing after supper, Aaron was roused by a knock at the back door. The police were huddled in the partitioned bedroom, having supped earlier, with the exception of Constable Duross who was warming himself by the fire. Ellen Sherritt called out “Who’s there?” to the visitor. Duross moved to the bedroom as the feeble response from the outside came through the door with a familiar German inflection: “It’s Anton Wick, I’ve lost myself.” Ellen asked her husband to direct Wick to the road and Aaron chuckled to himself as he went to the back door. He could not have expected that on the other side of the door Wick was restrained with stolen police handcuffs and held at gunpoint by Joe Byrne. Byrne moved behind the chimney to hide in the darkness as the door latch was drawn and the wooden door pulled open. Backlit in the doorway, Aaron looked out at Wick long enough to point at a copse of trees near the road and state “You see that sapling over there…?” before movement in his peripheral vision distracted him.

Without a word Joe Byrne emerged from the shadows and leveled a double-barrelled shotgun at Aaron, discharging one barrel into his victim’s throat. As Aaron reeled back, incapable of making any sound other than a strangled gurgle, Joe stood into the doorway and discharged the second barrel into Aaron’s belly, some of the shot whizzing past Ellen into the front wall. Aaron stumbled backwards and fell to the floor, his handsome face quickly drenched in blood from the ruptured arteries in his blasted throat. Mrs. Barry, the mother-in-law of the victim screamed in terror. Joe entered the building, thin wisps of gun smoke swirling past him from his shotgun. “That is the man that I want,” Joe snarled as he stood over Aaron’s lifeless body, “the bastard will never put me away again.”

“THE MURDER OF SHERRITT. (From a Sketch Taken Immediately after the Departure of the Kelly Gang)” from The Illustrated Australian News, 03/07/1880

Turning to Mrs. Barry Joe proclaimed “You needn’t worry Mrs. Barry; I won’t harm you nor your daughter, but I want whoever is in that room.” gesturing to the bedroom. Joe asked Ellen who was in there and she told him it was an itinerant worker named Duross, knowing that the constable was not acquainted with Byrne or the Kellys as he was only recently up from Melbourne and wouldn’t be recognised. Promptly Joe presented a revolver and covered Ellen Sherritt, ordering the terrified widow to bring Duross out and Mrs. Barry to open the front door. As she did so Dan Kelly entered, nodding a greeting and presenting a revolver. He grinned at the sight of Aaron’s body. Mrs. Barry asked to go outside and Joe consented, being more occupied with getting whoever was in the bedroom. Joe reloaded his shotgun and once more instructed Ellen to clear out the bedroom. When she entered she found the constables cowering under the bed in terror with pistols in hand. She told them to come out but they responded by telling her to get down for fear they might accidentally shoot her. Calling back to Joe, Ellen informed him that the man in the bedroom would not come out. Joe fired a shot into the bedroom past Ellen’s head and demanded she bring whoever was in the room out or he would riddle the house. Ellen tried once more to bring the police out with no success and Joe’s patience was worn thin. He hollered that if she did not bring the man out of the room he would shoot her and her mother. Ellen tried a final time to coax the police out but they dragged her under the bed with them and kept her there. The young woman was shoved back against the corner of the bed and worried that she would be suffocated and suddenly passed out. She was roused when her mother entered the room and tried to pull her out from under the bed but the police prevented her. Mrs. Barry was frantic, stating that Byrne would burn the hut down unless everyone came out of the bedroom. From inside they heard Byrne grumbling “Come on; those bloody dogs in the room won’t come out.” 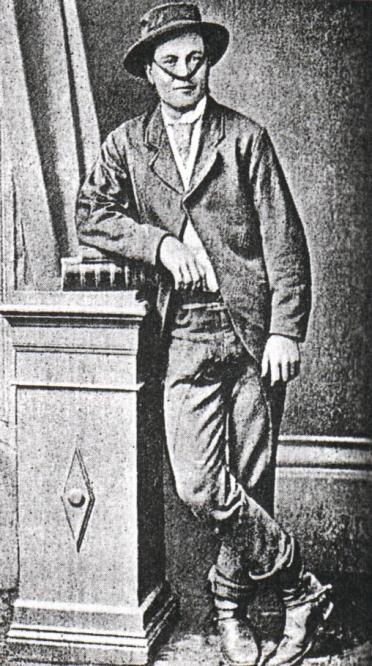 Aaron Sherritt poses for Bray of Beechworth. He wears a low-crowned hat with chinstrap under the nose – the sign of the Greta Mob.

At nine o’clock Joe and Dan left the hut, tired of waiting for everyone to emerge from the bedroom, cussing and grumbling as they went. Constable Armstrong was the first to leave the room at eleven, by which time the candles had all burned themselves out. Armstrong put out the fire and closed the doors and directed everyone to wait until sunrise before venturing out, believing that the outlaws were waiting outside to ambush them. He asked for a drink to which Mrs. Barry informed him that there was cold tea on the table from supper. Ellen cautioned that Dan Kelly may have poisoned the tea and it was immediately disposed of. Armstrong then sent Mrs. Barry out to fetch water and prepare breakfast for the police. By this time Anton Wick had been set free by the outlaws.
At sunrise a Chinese man was passing by and Armstrong gave him a note to give to the schoolteacher (the school being not far from the hut) and some money to pay for the service. Eventually Mr. O’Donoghue  the schoolmaster came by the property and said he would raise the alarm. However half an hour later he was back stating he could not go as his wife feared she might be murdered before he came back. A local miner named Duckett took up the task of raising the alarm but after two hours with no communication Armstrong decided to head out himself. Nothing further was heard at the hut until late in the evening when four troopers arrived to relieve the ones that had been on duty.

The conduct of the police led to them all being dishonorably discharged from the police force. Constable Armstrong in particular was heavily criticised for his cowardice.
The stress of the night resulted in Ellen Sherritt having a miscarriage, thus losing her husband and unborn child in one fell swoop. She campaigned to receive maintenance payments from the police as Aaron was officially on their payroll when he died.
The effect of the delays was that it was almost a full day before a party was sent on a special police train to hunt for Sherritt’s murderers, throwing out Ned Kelly’s well-laid plans to derail the police train at Glenrowan – but that’s a story for another day. 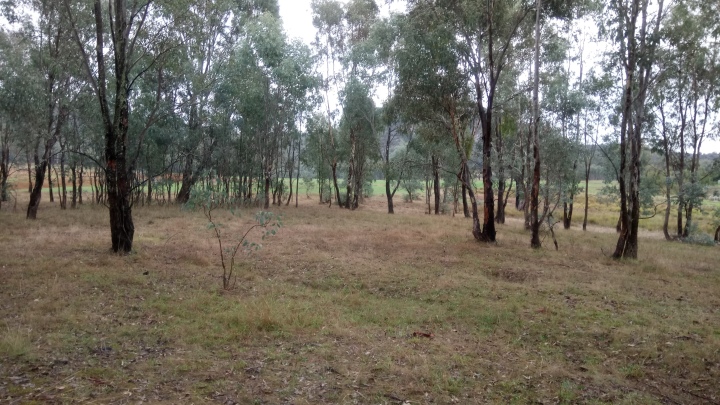 The site of Sherritt’s hut in Eldorado as it looks today.

5 thoughts on “The Murder of Aaron Sherritt”