Queensland can’t lay claim to a great many bushrangers when compared to its southern kin, but at the top of the hill stand the Kenniff brothers, Patrick and James. With their roots in Tipperary during the Irish potato famine of the 1840s, the Kenniffs were seemingly born to rebel. Like many bushrangers they began as cattle rustlers but their crimes soon escalated into grisly territory.

Patrick Kenniff was born in 1863 to James and Mary Kenniff in Dungog, New South Wales. Paddy’s little brother James was born in 1869 but his birth was not registered. Later there would be Thomas and John to add to the ranks. In 1891 the family made the move to Springsure, Queensland where the boys worked as labourers, jockeys and bookmakers at the race meetings. In 1893 Paddy and Jimmy headed to the Upper Warrego where they fell in with the gang of stock thief Thomas Stapleton taking them down a slippery slope they would never return from. Throughout their early life, the Kenniffs rode with their cousins and Aboriginal boys from the Bidjara people, stealing cattle and horses with impunity.

If there was one thing that defined the Kenniffs it was their relationship to all things equine. Paddy in particular was considered one of the best horsemen around and is reported to have on one occasion robbed a Casino hotel and escaped through a flooded stream, cutting off his saddlebags mid-stream so that when the police caught up to him he could cooly inquire what they wanted. Jim was also an expert horseman too, training a racehorse called Darramundi in Roma in 1901 winning a number of races in Springsure and Tambo.

In December 1894 the brothers first appeared on the radar of the authorities after a race meeting in Charleville. Having had a bad day at the races the Kenniffs discovered they were short on funds to repay their debts so they pinched three of the race horses and bolted. After stealing a mob of cattle at Meteor Downs, James Kenniff senior took the mob into Roma for sale while the brothers Paddy, Jim and Tom would traverse the surrounding areas into New South Wales avoiding police attention as well as they could. Paddy knew the stock theft charges against him were flimsy and planned to use the proceeds from the sale to pay a lawyer to get him off once he’d turned himself in. But, as these stories usually go, the Kenniffs could not evade the forces of law and order for long. In February 1895 the brothers were caught by Tambo police but succeeded in escaping custody and heading back into the bush leaving the troopers with egg on their faces. It wasn’t until March that they were caught proper, police sneaking up on them at their camp. Paddy mounted one of the horses and took off but was stopped by one of the officers who fired at his mount causing the rider to be thrown off. Jim mounted and took off but was knocked out of the saddle by a low branch. Tried in Roma Paddy got five years and Jim three. While the brothers did their time in gaol neighbours, spearheaded by one Albert Dahlke who was a prominent squatter from Carnarvon Station, protested about the impact such lawless people would have on the community and had the family’s land lease at Ralph Block terminated. 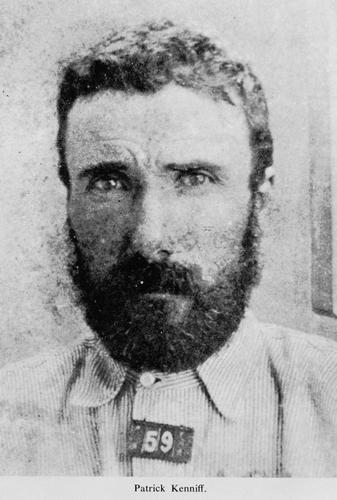 The Kenniffs were hardened by their time in prison and having their land taken away making the family homeless and forcing their father and the brothers to live in tents. Paddy and Jim took to riding at all times with weapons and their bitter resentment for Albert Dahlke festered away. An altercation between Jim Kenniff and Dahlke soon occurred wherein Dahlke gave the younger Kenniff an absolute belting, the Dahlkes being renowned in the region for their tough fists and indomitable resolve in a fight. Jim would later challenge Dahkle to a second fight and boasted that he would not thrash a Kenniff a second time around. From that day forward the brothers had sworn to take revenge on the squatter. The brothers roamed the Carnarvon region stealing horses from the squatters and sleeping beneath the stars dreaming of revenge.

In 1902 things quickly ramped up as the Kenniff brothers were once more wanted for stock theft. On 21 March a warrant was issued for the arrest of the brothers. On 28 March the Kenniff brothers had made an appearance at Carnarvon Station and threatened some of the staff so Constable George Doyle teamed up with Albert Dahlke and a black tracker named Sam Johnson to find the bandits. What happened next is the source of a great deal of controversy that has yet to be definitively resolved.

Sam Johnson claimed that after a chase on horseback Doyle and Dahlke succeeded in catching Jim Kenniff in Lethbridge’s Pocket two miles from where James senior lived in his tent, but as they had left the pack horses behind they did not have any tools of restraint and sent Johnson to fetch handcuffs. Johnson retrieved the pack horses, which were only 200 yards away, and as he rode back he could hear gunfire. It was surmised that Paddy and Tom Kenniff had come to rescue their brother and in the process a fight had broken out between the bushrangers and their pursuers. Johnson considered it folly to attempt to intervene and rode away believing he was being chased by the brothers. He found a man named Burke from a nearby station and induced him to ride back to the scene of the crime. They found Boudicea, Dahlke’s mount, wandering with her shoulders and saddle covered in blood.

When troopers set out at Easter time, led by Johnson they discovered Doyle and Dahlke’s pack horses in a cluster of trees at Lethbridge’s Pocket saddled and equipped with bulging saddlebags. They also found three small bonfires, long since extinguished, with telltale blood drippings in the soil surrounding. They found spurs and a pistol belonging to Dahlke and Doyle and investigated the horses. When they looked in the saddlebags they discovered they were filled with ashes, further investigation revealed shards of bone, hair and charred cloth fragments. The grisly find was identified as the earthly remains of Albert Dahlke and Constable George Doyle. Dr Voss the medical examiner confirmed that the remains were human in origin and the charge leveled against the Kenniffs was now murder and a reward of £1000 was offered for their capture.

Knowing that they were wanted on a hanging offence Paddy and Jim took to the bush and were soon joined by Tom. The Kenniffs were expert bushmen thanks to their previous occupations and managed to keep ahead of the police until 23 June ranging some of the toughest, most rugged country in a 200 mile radius. Police believed there was a good chance the brothers would make an attempt to take a ship to South Africa and kept tabs on all goings on at the docks. On 23 June 1902 the Kenniff brothers were caught at last in a dawn raid on their camp. Two sub-inspectors, fifty constables and sixteen black trackers arrived at the Kenniff camp barefooted for stealth and shot the horses. Paddy and Jim bolted in separate directions with Jim being nabbed first, Paddy keeping the police at bay with rifles from the scrub before handing himself in.

Sir Samuel Griffith presided over the trial of the Kenniff brothers in Brisbane on 3 November, 1902. The pair were found guilty of murder and sentenced to death on the evidence provided by Sam Johnson. The sentence was deferred, as per custom, to await an appeal. Public sentiment at the time seemed to be largely in favour of the lads due to them accidentally becoming figureheads for the struggles in Queensland at the turn of the century. Queensland at this time was in the clutches of drought and unemployment was rife. In these circumstances people are wont to become desperate and many saw this as an explanation or justification for the Kenniffs’ foray into stock theft. As with the Kelly gang only a little over twenty years prior in Victoria, the outlaws were seen by many to also illustrate the war between the squatters and the “cockatoo” farmers. Thus supporters collected funds and lodged an appeal to the Supreme Court who dismissed the appeal out of hand, though Justice Patrick Real questioned James Kenniff’s guilt in the matter and the validity of the evidence against the brothers provided by Johnson, much to the chagrin of the Chief Justice. The appeal phase over, James Kenniff’s sentence was reduced to life imprisonment his big brother Paddy, however, would still take to the gallows. When the brothers were taken from the courthouse to Boggo Road Gaol the prison van had to pass through a crowd of 500 spectators who cheered for the brothers.

On 12 January 1903 Patrick Kenniff went to the scaffold and hanged for the gruesome crime of murdering Dahlke and Doyle and incinerating their bodies. His last words were

“I have told you twice before that I am an innocent man, I am as innocent as the judge who sentenced me. Good-bye. May God have mercy on my soul.”

James Kenniff was released from prison in 1914 and would live long enough to see the coming and going of WWI, dying in 1940. To his dying day he protested the innocence of he and his brother.