As co-writer for The Legend of Ned Kelly I was faced with the conundrum of what made Ned Kelly such a significant character. What is the legend of Ned Kelly? Why is he the one everyone thinks of when the topic of bushrangers is raised? Unfortunately, the Kickstarter to raise the initial $2.5 million AUD budget was a fizzer despite a solid effort from our team and strong enthusiasm and backing from around 400 supporters so it’ll be a while before we can get our vision on the big screen, but the question remains: what’s the appeal?

The first thing we need to look at is the debate about whether Ned Kelly was a hero or a villain and why people dig their heels in on a particular side. It’s very easy to forget that Ned Kelly was a living, breathing human being. He had loves, hates, family, friends, skills and talents just like all of us. He loved horses, he was an excellent tradesman and his favourite book was Loorna Doone. Do these qualities negate the fact that he killed policemen, robbed banks and held people hostage? Certainly not, but they help to remind us that Ned Kelly was not some cartoon character or a black hat wearing outlaw in a cowboy movie.
What value is there in casting him as a hero or villain? To those that deify Ned, he’s a champion of the oppressed, an underdog who stood up for his beliefs and was matyred trying to instigate change. He represents the ideal of standing for something and not standing idle while injustices occur. To those that vilify Ned Kelly he is a murderous psychopath, a pathological liar and the figurehead for some kind of quasi-cult. To these people he represents everything that is wrong with human kind and should be used as a kind of bogey man to make people walk the straight-and-narrow. He is irredeemable to those that see him as nothing more than a glorified thug, and untouchable to those that idolise him.
The debate then takes on a personal dimension for some who identify strongly with the respective beliefs of their side of the argument. The question of Ned’s hero or villain status becomes the indicator of one’s own moral compass. Thus the debate about Ned Kelly ceases to be about Ned Kelly at all and simply becomes a contest about the moral superiority and respective intelligence of the opponents. Ned Kelly becomes the scapegoat upon which society heaps its hang-ups about moral values.

This illustration from the Melbourne Punch shows the way that contemporary media would portray Ned Kelly in an attempt to cast him as a villain.

The second thing we need to look at is his career as a bushranger. Ned Kelly was not prolific on any account. The Clarke brothers killed more policemen, Ben Hall committed more robberies, Captain Thunderbolt was at large far longer and Mark Jeffries committed more despicable acts. His aptitude as a bushman was remarkable, but Musquito’s was considerably more so. His network of sympathisers was large, but so was Harry Power’s. Matthew Brady had more female admirers as evidenced by the letters, flowers and gifts he received from them in prison. The key difference seems to have been his approach to his own criminality. He deliberately chose not to kill indiscriminately or rob every bank from Benalla to Seymour because he was trying to send a message.
Ned Kelly believed he represented a class of people who were oppressed by the unlawful and immoral conduct of squatters and police. He wanted to cast himself as the voice of the people. He robbed banks to raise money to pay his supporters, he wrote letters in an attempt to have his voice heard. Ned Kelly’s story takes on a unique political dimension not matched in bushranging since the days of Matthew Brady and William Westwood.
Moreover, his political leanings were matched with idiosyncratic pragmatism – in the near century since Black Caesar had become the first bushranger, nobody had ever considered bulletproof armour. This helped create the symbolism of the armour. Combined with Ned’s posturing as a kind of revolutionary, the armour came to represent the idea of fighting for justice to many and a unique Australian ingenuity when faced with hurdles.

Ned Kelly’s capture sanctified him to many and made Glenrowan akin to holy ground. His armour became a powerful symbol in Australian culture as a result.

Finally, there’s the contextual element. Ned Kelly’s story closes the true “bushranger era” that began in the 1820s and reached its peak in the Gold Rush. While other bushrangers have existed since 1880, they have been rare exceptions. The Kelly story spans from the convict era, through the Gold Rush, the “squattocracy” and the introduction of trains and telegraphy.
The Kellys were like celebrities as their exploits were detailed in the media on a scale of distribution never seen before and closer to the events chronologically than ever before. The siege of Glenrowan was effectively broadcast live thanks to the ability to rapidly transmit information through the telegraph service. Ned Kelly was a media sensation because technology allowed him to be. If Captain Thunderbolt or William Westwood had been afforded the same sort of coverage there’s no doubt they’d be just as popular.
Moreover, the story of the Kelly Gang is fascinating because the themes of persecution, justice, family and criminality are almost universally relatable, and the more modern world Ned inhabited compared to other bushrangers makes it easier to understand the stories for modern audiences. To understand the times and the people of the Kelly story is to understand ourselves and our time, which takes us back somewhat to my first point. 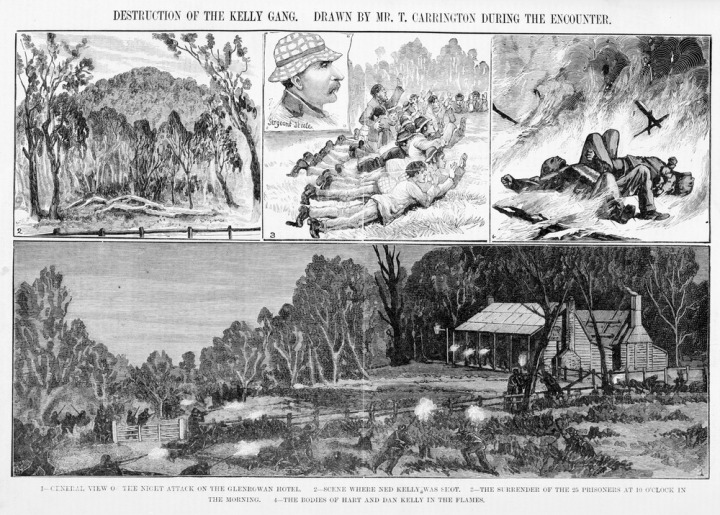 Within hours of the siege of Glenrowan beginning, word was reaching Melbourne and police reinforcements were being sent. On top of this people were able to get almost live updates of the proceedings thanks to the relatively new invention of telegraphs.

Looking at these elements we can see that Ned Kelly is not necessarily the most interesting or necessarily the most relatable or admirable, but he is probably the most accessible for most. More depictions of his story exist across media than any other bushranger (rivaled only by Thunderbolt, Matthew Brady and Ben Hall). He’s close enough to us in time that most of the documents, relics and places are still accessible and well preserved.
The way his story was recorded plays a big part in this too. Researchers have a far easier time learning about him than, say, Dan Morgan for whom most official records no longer appear to exist. As such, Ned Kelly is an easy target for historians because you don’t have to do much digging around for the facts, thus enabling more people to have access to information and formulate an opinion than in the case of most other bushrangers. This may account for why there’s no online flame wars between factions of Moondyne Joe enthusiasts or museums dedicated to the relics of the Ribbon Gang.
That the Victoria Police museum dedicates almost a third of its floor space to the Kelly Gang is testament to the way the story has not only captured the imagination, but has been rather successfully preserved for posterity.

Items such as the silk cummerbund Ned Kelly received for saving Dick Shelton from drowning help people create a connection to the Kelly story not possible with many other bushrangers.

So what then is the legend of Ned Kelly? It seems that the legend of Ned Kelly is that a widow’s son emerged from poverty in rural colonial Victoria to become a self-proclaimed people’s champion and the most wanted man in the British Empire – a so-called “public enemy number one”. In death he became a symbol that was much more potent than he could ever have hoped to have been in life, because word of his deeds and character traveled at an unprecedented rapidity and gave people time to form a connection before the story had ended. It’s not that Ned Kelly was a prolific criminal or even that he was necessarily the best at what he did, it was that he hit a nerve at just the right time to cement his reputation in the cultural psyche and that is why it’s important to examine these stories. Understanding why Ned Kelly is integral to our culture allows us to reflect on the values we, as a nation and society, hold in esteem and who we are as people. 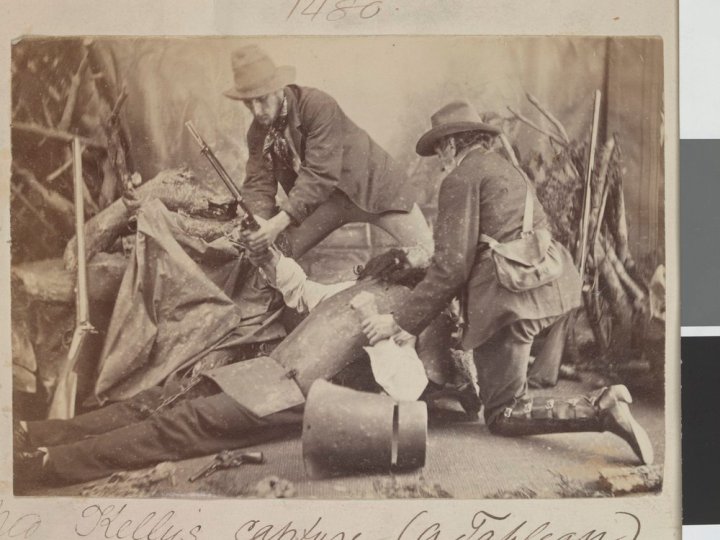 A legend in his own lifetime, Ned Kelly was just the right person to help cement Australia’s attitudes to authority and criminality in ways that impact even today.